What It Is. Why You Need It.

Financial markets set the values for publicly traded securities, but there are no such markets for the millions of closely-held businesses across the U.S.  As the landscape for business owners evolves, business valuation services are increasingly important.

Why You Need a Business Valuation

An up-to-date business valuation is an increasingly important strategic tool you can leverage to prepare for evolving business and personal situations. With a current valuation in hand, you will be prepared for unforeseen circumstances and opportunities—and armed with valuable insights that will enable you to make more informed decisions.

From a business perspective, a valuation is a key factor in obtaining bank financing, venture capital, or capital from other investors if your growth plans require additional funding.  Your growth plan, or exit strategy, may also necessitate a  comprehensive valuation to more successfully negotiate and evaluate transactions such as a partnership investment or buyout, merger or acquisition, strategic sale, or Employee Stock Ownership Plan (ESOP). And if you are beginning to contemplate an exit strategy, a valuation establishes a baseline value for your company. It is the first step in developing a plan to improve profitability and increase the company’s value. 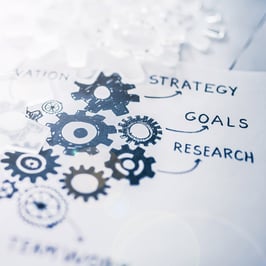 On the personal side, a valuation also plays an important role in estate planning. It is an essential element regarding transfers for gift tax, whether you’re granting ownership interest to a family member or donating to charity.

And then there are those unexpected and unpleasant situations where a current business valuation is critical: like in business disaster planning to obtain proper insurance coverage, and in the event of shareholder or partner disputes.

Short on time? Get it now and read it later.

What is a Business Valuation?

A business valuation is the process of developing the economic value of your company, and includes using recognized valuation methodologies, for both public and closely-held businesses.  It represents the objective worth of your business. However, it is not as straightforward as totaling up the value of your equipment and unsold inventory, or applying a multiple to EBITDA. Depending on what you're trying to do, different valuation approaches and methodologies may be applied. 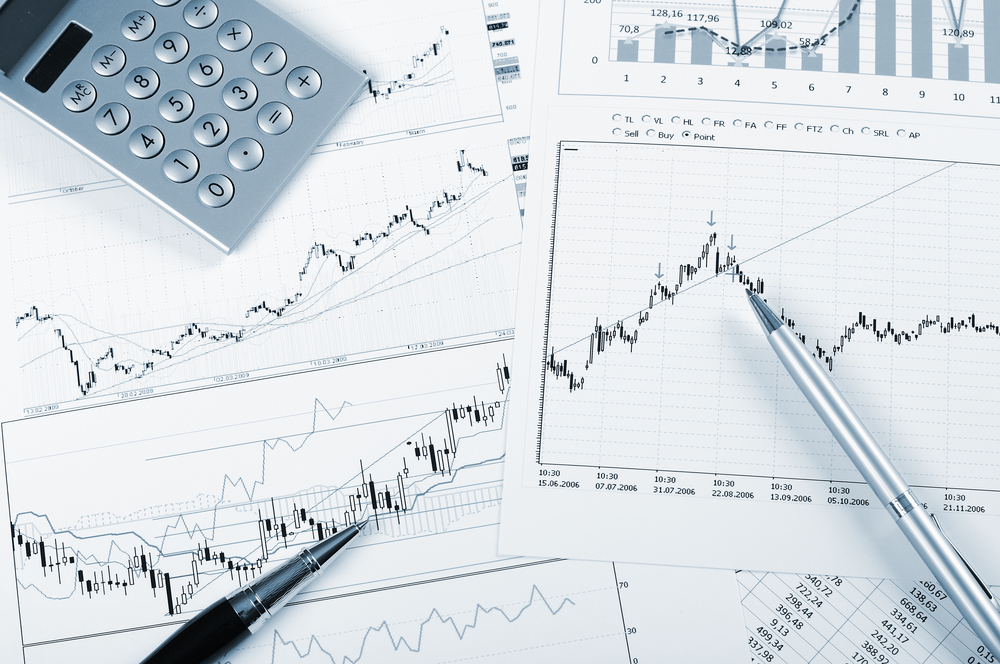 A valuation must be framed by understanding the standard, premise, and level of value, and the analyst will work with you to establish these. If you're unfamiliar with these terms, keep reading — we'll explain each one.

The standard of value relates to, and is driven by,  the purpose of the valuation and helps answer the question, "What do you mean by value?" 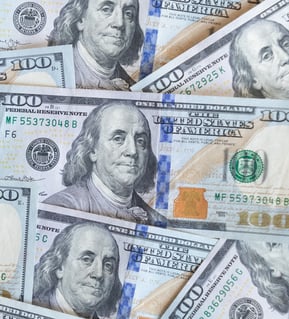 The standard of value and the context in which it is used will influence the approaches and methodology used in the valuation. The applicable standard of value should be identified and defined as part of any valuation engagement. There are four main standards of value, each with numerous inherent assumptions that represent the basis of the valuation:

These assumptions will shape the application of the valuation approaches and methodologies.

Fair market value is one of the most widely recognized and accepted standards of value. Given its use for virtually all federal and state tax matters, the most prominent definition for fair market value comes from the U.S. Treasury regulations.

While fair market value is the standard of value utilized by the IRS, it is also commonly applied in judicial matters, used in buy-sell agreements and for other valuation situations.

Fair value is a more complex standard of value with numerous definitions that depend on the context in which it is applied. Fair value can be the prevailing standard of value used in a number of situations, including financial reporting, dissenting shareholder, and certain transactions.

For matters involving financial reporting, fair value is defined by the Financial Accounting Standards Board (FASB) as “the price that would be received to sell an asset or paid to transfer a liability in an orderly transaction between market participants at the measurement date.”

Investment value considers the value of a company from the perspective of a buyer or current owner.

While investment value is not a typical standard of value utilized by valuation analysts, it does make its presence in family law occasionally. While not always described as investment value, courts can look to the value of business in the hands of a particular owner.

This standard of value is not often used in any meaningful way for business valuation purposes, but the concept itself is worth noting. 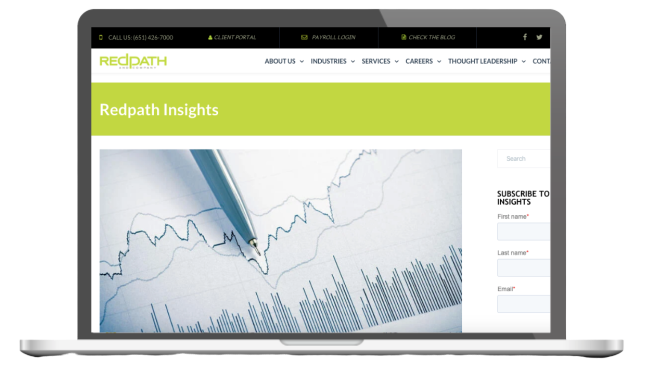 Go in-depth with our Insights on Business Valuation to help you make decisions that are best for you.

Whether you're deciding if a Business Valuation makes sense for you or you're trying to calculate your company's value, we have the article for you.

In addition to the premise of value, there are also operational premises that help shape how to view the business operationally. The premises of value are going concern value and liquidation value.

The going concern value considers not only the tangible factors of an enterprise but also the intangible elements, resulting from continued operations.

As the name implies, liquidation value is the net amount a business would realize if the business is terminated and its assets are sold piecemeal. Liquidation can be either orderly or forced over a reasonable period of time.

Different levels of value are achieved through the types of cash flow utilized in the analysis and considerations of the discounts and/or premiums that are applied to the valuation conclusions.

Current valuation theory suggests that there are four main levels of value:

Strategic control value represents the highest value for the company. It is the value the company has to a particular buyer who would experience a certain amount of synergy from the acquisition, and reflects the premium they are willing to pay to acquire the business.

Financial control value reflects the value of the company to a financial buyer, like a private equity firm. It is based on the financial condition of the company and any increase in earnings due solely to improvements in company operations, and not due to any perceived synergies or strategic factors from the acquisition.

Also referred to as the marketable minority value, the as-if freely traded minority interest value is the value of the company if it were freely traded in an active market. Ownership interest at this level of value cannot influence the control over the company, but access to a readily available market provides the ability to sell shares at market price as they see fit.

Because no market exists to buy or sell shares in the company, this represents the lowest level of value. This ownership interest has no control interest and no access to a free market, value is often based on available distributable cash flows. A discount for lack of marketability (DLOM) is often used in determining this value. 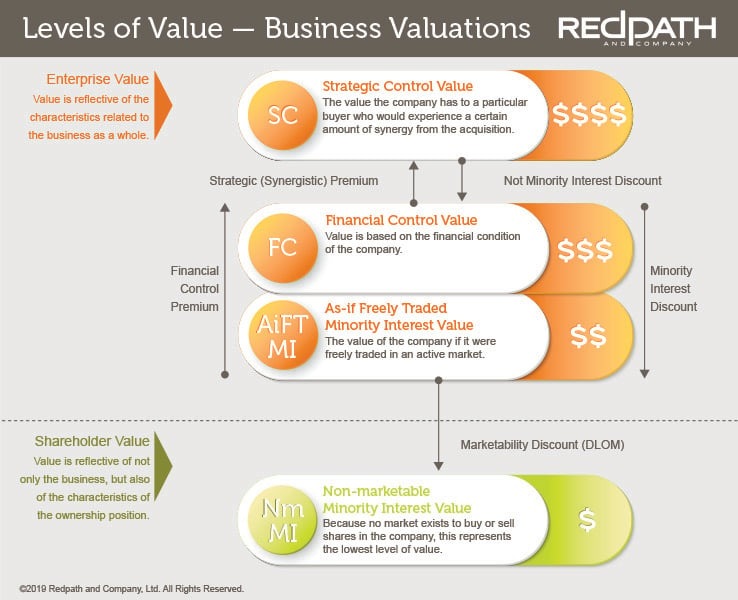 No matter the type of business or its size, business valuation approaches fall into three basic categories, with several methodologies available under each approach:

Selecting the correct approach(es) and methodologies are dependent upon the valuation analyst and are determined by the facts and circumstances of each valuation.

An asset-based approach looks at the value of your company's net assets – your total assets minus your total liabilities.

As its name implies, the book value uses data found in the company's books, which means it relies on historical costs recorded on the balance sheet. Over time the asset values may deviate from historical cost and unrecorded intangible assets can be created.  As a result, book value is not typically a methodology utilized in a business valuation.

The adjusted net asset method starts with book value and then converts all assets and liabilities to their fair market value. It also accounts for intangibles like the value of your brand name or your company’s reputation. For most businesses, the income and market approaches offer a more efficient way to capture both the tangible and intangible value of a company, so the asset approach is not typically relied upon.

Value is always forward looking. Discounted Cash Flow, an income-based valuation method, estimates the present value of a company to an owner based on its future cash flows and discounted for the risk of the investment. It requires an explicit forecast of future cash flow streams over a reasonable short-term period, and an estimate of stable and sustainable long-term cash flows. This method is most often utilized as it represents the most company-specific assumptions about the future.

Like Discounted Cash Flow, this method is forward looking, but instead of forecasting multiple years, it relies on a single period.  Capitalization of Earnings methodology uses the current earnings of a single period to calculate value of anticipated future profits. This single-period capitalization is most appropriate when a company's current or historical level of operations is believed to be representative of future operations and the company is expected to grow at a relatively stable and modest rate.

Companies may also be evaluated on the basis of their market value. This approach considers the sales price of other similarly-situated businesses in the same industry or one similar. Market-based valuations only work when you have an adequate number of comparable companies. The two primary methods within the market approach are the Guideline Public Company method and the Merger and Acquisition method.

There are two levels of service a business valuation analyst can offer: Business Calculation Report and Business Valuation Report.

The two may sound similar, but they are actually very distinct.  A expert valuation analyst can help business owners review the facts and circumstances of the situation and determine which type of engagement makes the most sense. 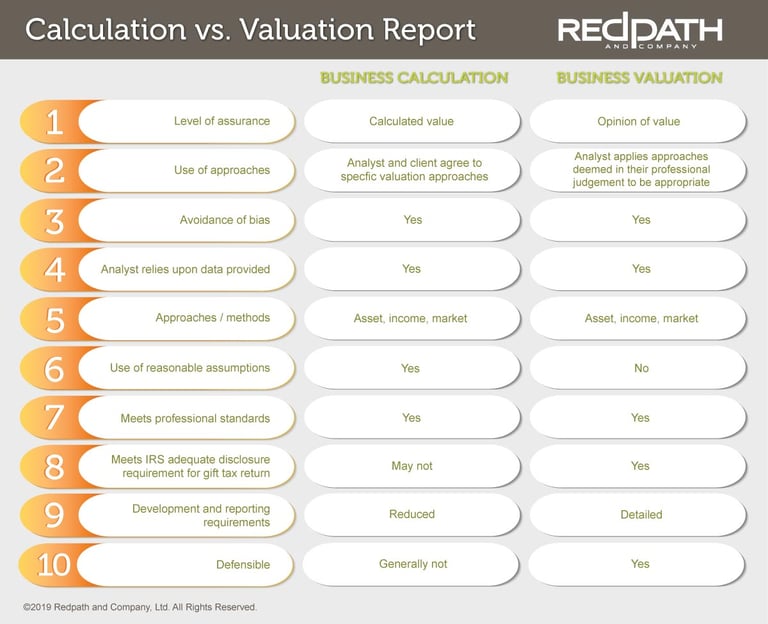 Preparing and Planning for Valuation

While a simple formula may ballpark the value of a business, an accurate valuation requires a detailed analysis of a variety of aspects of a business. As a business owner, once you determine the reason for getting a proper valuation, you can do some things to proactively to prepare for a valuation to be performed.

Are Your Documents In Order?

Take steps now, before a formal valuation engagement begins, to gather data that will be needed to properly value your company. Broadly speaking, the valuation will require three to five years of historic financials and projections, company history and background, information about personnel and facilities, and insights about operations and related documentation.

There are many reasons to get a business valuation, but maybe none more important than leveraging an up-to-date report as a strategic planning tool. Whether you're considering development of an exit strategy and succession plan, laying the foundation for future business growth and value, or want to be prepared for changes in your personal situation, a current business valuation will help you make more informed decisions.

Based on the circumstances of the valuation and your business and personal goals, a valuation analyst will select the correct approach and methodology to value your business. The analyst will works closely with you to establish the standard of value, premise of value and level of value. A general understanding of these valuation concepts helps equip you for meaningful conversations with a valuation professional.

Already identified a need for a business valuation?

Reach out to one of our experts to discuss your specific situation and goals.